Floods have the potential to cause significant structural damage to a commercial or residential property. Residential homeowners could suffer thousands of dollars in damages, while commercial property owners could suffer millions of dollars in damages. Not only do businesses have to deal with structural damage, but they also have to deal with income loss and damage to their inventory. That is why their amount of financial loss is so much worse compared to homeowners.

Do not confuse flood damage with water damage because they are two different things. That is why business owners are required to purchase a separate insurance policy for flood coverage, whereas water damage is typically covered under their standard property insurance policy. If you have experienced flood damage, give us a call 24/7! (888) 219-6890

A commercial business owner’s policy will usually provide insurance coverage for water damage. Insurance companies define “water damage” as damage caused by something other than a natural disaster, such as a burst water pipe, overflowing toilet or sink, or a leaky roof.

In most situations, these types of incidents won’t cause significant damage to commercial property. Since insurance companies expect the values of water damage claims to be minor, they put this coverage under the primary commercial business owner’s policy.

A minor water damage claim should get approved if the circumstances are believable. But if you tried to file a water damage claim for an incident that involved flooding, your insurance company would definitely deny your claim. You would need a whole separate flood damage insurance policy to cover it. 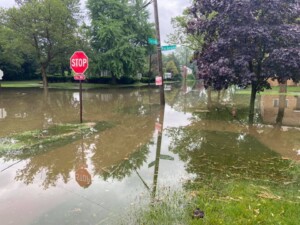 According to the Federal Emergency Management Agency (FEMA), a flood is an incident where at least two acres of dry land are inundated with water. The most common reasons for flood damage are weather-related incidents, such as hurricanes, tidal waves, melting snow, mudslides, landslides, excessive rain, and an overflow of lakes, waterways, and rivers.

You can purchase flood damage insurance through a private company or the National Flood Insurance Program. FEMA operates this program for property owners who wish to have government-managed flood insurance coverage. You’ll have a much better chance of getting your claims approved under the program versus a private insurance company.

What if I have a burst pipe that causes a flood?

That is a common question of many business owners. Unfortunately, a flood damage insurance policy does not cover a burst pipe-related flooding incident. You would have to resort back to the water damage coverage of your primary insurance policy.

However, your insurance company would probably deny that claim because they’ll say you didn’t do enough to prevent the flooding from the burst pipe, such as turn off the main water valve of the property.

What You Can Expect

When a business owner attempts to file a flood damage claim or water damage claim with their insurance company, it is common for the carrier to dispute the claim. The carrier will focus on two main factors for each incident:

You cannot do much to prevent flooding other than taking safety precautions before a big storm. Your insurance company is not about to deny the validity of your flood damage claim if numerous people are filing the same claim in your location.

If you have a high-value water damage claim, your insurance company may deny your claim by saying you didn’t do enough to prevent the damage. Whether or not this is true is debatable.

About the Author: Stewart Robinson